Jake Stewart was born and raised in Blackville, New Brunswick.

Showing an appreciation for the political process at an early age, Jake served as Blackville School Student Council Vice President while a member of the 1996 graduating class. He served on the Blackville Municipal Council from 2008 to 2010, when he was sworn in as the first ever Blackville resident to represent Southwest Miramichi in the September 27, 2010 provincial election.

In the summer of 1982, my mom’s first cousin, David Nahirney, visited Blackville and stayed at the home of my grandparents, Josie and Elwood Sturgeon. Although I was only 4 years old, I remember it distinctly because David entertained my brother and I every day and I thought it was great! Earlier this week, out of nowhere, David emailed me to say hello and sent along these photos. It was clear he’d been thinking of his extended family. I haven’t seen David since 1982, but seeing these photos makes it feel like yesterday. I couldn’t be more thankful to have these photos, and my goal now is to get to see David again.

Jake and after he visited you he came down to Halifax and had a great visit with his Aunt Minnie and Uncle Al. We always love his visits.

Great photos Jake. So good to see your Grandparents again. I remember them just like the picture. Been a long time since I walked my little black poodle by their house in Blackville.

I keep in touch with Paul he is the same age as Tony and Jim, he is a clergy.

So nice for you to reconnect. Remember him well. Hannah’s son from Edmonton. If I remember correctly. Met him one Summer and a friend from medical school. Josie & Elwood so welcoming to all the families.

Josie was a beautiful lady inside and out missed her when we moved back.

great pictures...I remember as a kid Elwood and Josie visiting our place on Sundays...i always thought she was such a kind and pretty lady...

I remember Josie and Elwood ,I used to take Dad down,he got his wood from Elwood and talk for hours I know,I would wonder how long are they going to talk,but said nothing.

Was he the cousin in Edmonton?

Sweet memories for sure ♥️♥️

I got those pictures as well plus others. We chatted lately on the phone.

What a great memory

David and I keep in touch. Had about a two hour call last weekend!🙈

ah such a nice memory and photo

How nice. Look at Josie. So beautiful

Roman had the early jump on River for most salmon landed this spring until today. River hooked and landed two, and evened the score! Sibling rivalry over most salmon landed on the Main Southwest Miramichi is not a new scenario for anyone living here! Of course, Danny Stewart was the head guide which means I was demoted to photography!
Great day!

Congrats to the young fellows Jake. Not much wonder they were successful as they had the best guide on the River. OMG Jake, Danny looks more like the ole fella every day. I had to take a second look there.

Black salmon fishing is usually a cold miserable job, but someone has to do it.😊

Wonderful to see the traditions being passed on and keeping to the grass roots. All the best and tight lines Jake. Great times at the ole Lodge. If walls could speak what stories would be said. Lol. 🎣

River looks to be taller than Danny

Grampa Keenan would be proud.

Looks like the boys are having a great time, great photos

Awesome, family is the core!!!

Do they sell those head guide hats that Danno has on at Brocks ? Lol 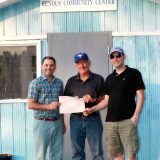 RENOUS / PINEVILLE: The provincial government has made a $10,000 investment into the Renous Rec Center. The newly installed heating and air conditioning system will drastically lessen costs to heat the Renous Rec. The added air conditioning also opens doors for new revenue opportunities. I made the commitment to the people of Renous and Pineville… END_OF_DOCUMENT_TOKEN_TO_BE_REPLACED 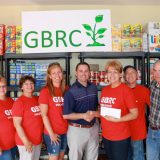 The Greater Blackville Resource Center received supplement funding from Healthy & Inclusive Communities Dept. The grant was recently presented to the Greater Blackville Resource Center (GBRC) food bank by MLA Jake Stewart. The food bank, located in the Voice of Hope Ministries building and has 56 registered clients. This grant will allow the GRBC to restock shelves and… END_OF_DOCUMENT_TOKEN_TO_BE_REPLACED

The Doak House is a huge part of Doaktown’s heritage, and we feel strongly about preserving the inheritance left by our ancestors. I would like to congratulate the entire team at the Doak House Provincial Heritage Place on 30 years of service.