I took the time today to reflect on the outright success of the official NB Day celebrations in Blackville. What a testimony to the strength, wit, and hospitality of our people. The words of Chief Augustine appealed to all of us and the traditional drum was soothing to an audience filled with culture. 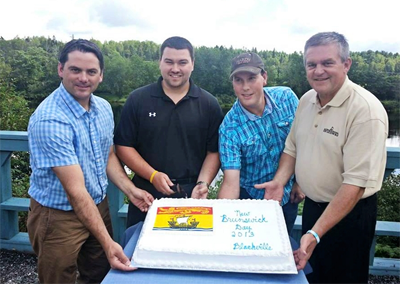 Winston’s bagpipes really set the tone. Matt Sturgeon took a leadership role on the committee from the moment he became chairman.

Sometimes its difficult to see the finished product while in a planning stage, but our organizing committee knew the potential very early on. The Municipal Park looked spectacular. You’ll not find a jewel like our park elsewhere, especially as its nestled between two rivers. To get the chance to host the official ceremony was a real privilege, and it puts so many things in perspective. I’m proud to be from here!

Kerry Underhill did a bang up job as MC. Her being in this role made us all look good. We showed character yesterday. The musical talent on display was predominantly local people, and what a display of talent. How fitting it was to see Amy Jardine open and close the day of entertainment. 1200 people in all came out to NB day.

It was also a great privilege to speak at the event about Blackville and its role in New Brunswick. There is so much to be proud of. When you work together you can accomplish anything… use yesterday as example. We set the bar high folks, real high, and it sets an example for the children of our communities. Great work everyone!